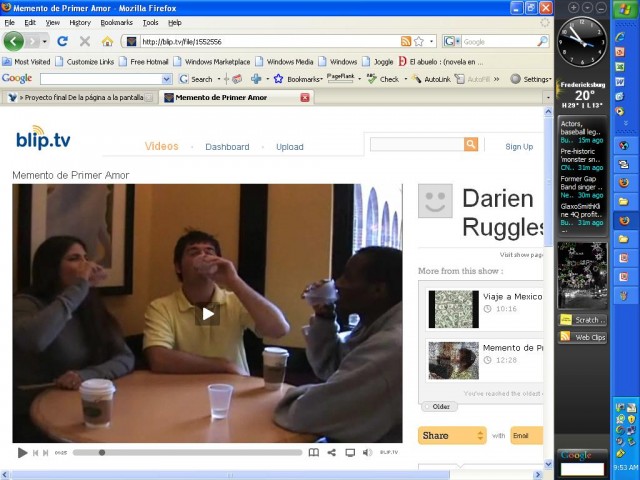 After several disappointing attempts at a course on Spanish Realism and the Generation of 1898, in the Fall of 2008 I taught Spanish 375 with a completely different approach, and a new unofficial subtitle—“De la página a la pantalla” (“From the Page to the Screen”).  The coures was focused on film and television adaptations of major nineteenth-century novels.  We read four novels and saw their film adaptations, plus we read a collection of short stories that would be the topic of the final project.  Throughout the semester we created our own storyboards of the novels we were reading to show how we would adapt them to film, which we posted on the class blog (http://span375.umwblogs.org ).  The final project was a group adaptation of a series of short stories by Emilia Pardo Bazán, which the students titled “Memento de Primer Amor.”  Thus, although I am sure none of these students came to the course with a deep desire to learn about the 19th-century novel in Spain, their interest in film and television was a vehicle to encourage them to consider the texts and the film adaptations of them in analytical, interpretive, and creative ways.

Here is a slideshare presentation I gave at the Mountain Interstate Conference about the experience in 2009.

Here is the syllabus: